April 3, 2013 by molehill in Uncategorized

No member of Molehill ha 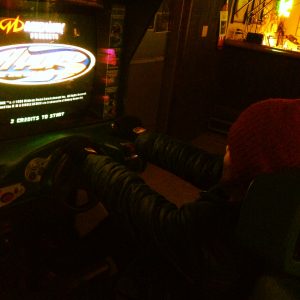 d ever been to Muncie before, so we didn’t really know what to expect.  However, after our recent great experiences in Shippensburg, PA and Mansfield, OH, it’s safe to say we had high hopes – and Muncie, you didn’t disappoint!  We played a very cool venue called Be Here Now, which had a bunch of old-school arcade games in the band room which Greg took advantage of later.  We didn’t know anyone in Muncie, but there was a great crowd at the show.  A bunch of students from local Ball State came out to the show and, despite the fact that they had never heard nor seen us before, ROCKED THE F OUT!  We’ve definitely never had a crowd that was so enthusiastic before we even started playing!  Every time Greg would play a piano chord during sound check, the whole place would go nuts.  And this continued throughout our set.  We made a lot of new fans, and met a lot of great people.  Muncie – we can’t wait to come back! 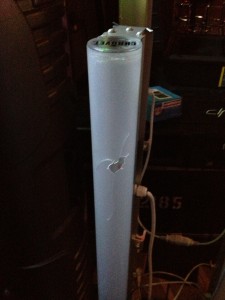 On a sad note, one of our colortube lights met its demise that night, falling directly onto one of the screws on Devin’s drums.  The lights worked for the rest of the night, in true badass rock and roll light fashion… it wasn’t til the next day that we started having real problems.

The next night was in Indianapolis.  We played a very nice club called Birdy’s.  This was definitely the biggest venue we have played in Indy to date.  After the show, I met a lovely (somewhat drunk) girl whose birthday was that night.  She had come to the venue to see a friend’s band, but she had some wonderful things to say about Molehill.  She kept saying more and more nice things, and telling me how much she loved music, to the point that she actually started crying.  She said she never wants music to stop being a part of her life.  I gave her a hug, because I didn’t really know what else to do.  If people cry after your show, that’s a good thing… right?

The next morning was a near disaster.  We had to leave Indy early on 3 hours of sleep to get Devin back to Chicago in time to play his church gig.  As soon as we opened our beautiful Red Roof Inn door (<cough> sponsor us! <cough>), we saw that it was snowing outside.  Hard.  Indy was expecting about 8 inches of snow that day.  Now look, I’m an avid skier, but the Silver Bullet does not handle well in snow, and that’s specifically why we avoid touring in January and February.  Now, here we are on the 2nd-to-last weekend of March, and there’s a huge snowfall!  What gives?  This was one of the worst drives we’ve ever made.  Before any of us realized it was snowing, Trevor had agreed to take the first driving shift… I was going to try to sleep.  Yeah, fat chance.  The highways hadn’t been plowed yet, the sun wasn’t up, we were in a van that can’t handle snow, and we’re on the highway, trying to make it back to Chicago by 9am.  I couldn’t sleep.  A part of me wanted to take a picture, but I thought that was tempting fate.  Instead, I just stared at the street and prayed that the plows would come soon.  After a couple hours of tailing every semi truck we could (going 20 mph for a nice long stretch), we finally escaped the storm’s reach, the sun came out, and the roads cleared up.  Whew.  In fact, the roads were so clear that we were able to make up for lost time, and still get Devin back in time for his gig!  All’s well that ends well, but I’d prefer not to go through that again. 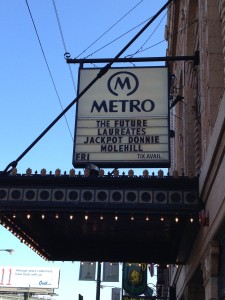 Back in my Libertyville High School days, I was in a funk metal band called Spastic Nytzzz.  This was my first band, and I loved it.  We made our first tapes on an honest to God 4-track recorder.  I would then send these tapes to the Chicago venue that everybody dreamed about playing – The Metro.  I would mail in a tape, then call the venue week after week, asking if they’d listened yet, and if my band could play there.  I sent 2 or 3 tapes, and then when they kept blowing me off, I even made the 1 hour drive to Chicago just to hand my tape to someone in person.  I kept calling, and still got blown off.

Well, 13 years later, we finally booked a gig at the Metro.  No doubt, this is a milestone for us as a band, and for me as a musician.  This is “the” venue in Chicago.  Sure, there are bigger clubs, but none has quite the mystique of the Metro.  Plus, it’s still pretty damn big!  I’ve been to so many great shows here, and so many amazing acts have come through that I wish I had seen – The Ramones, REM, The Smashing Pumpkins, Nirvana, Soundgarden, Oasis, The White Stripes, The Killers, Kanye West, Arctic Monkeys, Fallout Boy… the list goes on and on.

I don’t know if I can describe the feeling of first standing on that stage and looking OUT at the venue, rather than standing 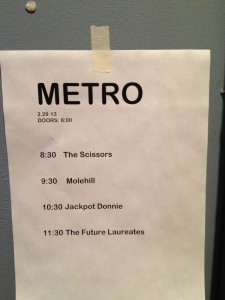 in the venue and looking up at the stage.  It was like a seismic shift in my reality.  A pinnacle climbed.  This thing I had always been reaching for was finally in my hands.

Supposedly, the Metro is haunted.  A friend of mine, when he played the Metro for the first time a year or two ago, wrote down about how he explored the place, talked to people about the ghosts, and things like that.  My experience wasn’t like that – I stepped on stage, looked out at the empty venue for a minute, and then got back to work!  I could only soak it in for so long before I had to get back to preparing – we had colortubes to test (which, by the way, decided to crap out in Indy – we only were able to use 2 of them for this show), we had a 3-piece string section that needed cues.  We had sound guys to talk to, guest lists to pass out, Mexican food to eat!  (by the way, huge burrito before playing a rock show – terrible idea)  And then I had to make sure to sit for a little while before the show and get focused and ready. 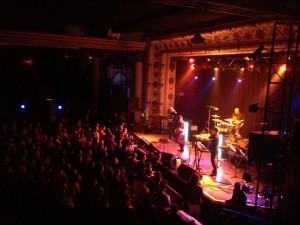 Once we hit the stage, I was in heaven.  The crowd was huge – the floor was packed, and the balcony was packed as well.  We rocked as hard as we could, and somehow the playing felt so – easy.  After all the touring we’ve been doing, these songs just fall right into place, almost without thinking about it.  We’ve practiced so much and worked so hard on perfecting our craft for times like this that, when the time arrives, it’s almost surprising how well that plan has worked!  Greg told me afterwards that he felt a bit nervous before we started playing, but halfway through the first song it felt like business as usual, we all just locked in.  As soon as we got off the stage, all I could think was – why does it have to end?  Why can’t I spend the rest of my life at this show on that stage, singing for people!  Maybe that is what it will be like when I die, who knows.

So yeah, this was a milestone for us.  It was an amazing night, and we received so much love and support from so many people who have been important in our lives as a band and individuals.   But in some ways, it was also just another show.  One more step on our journey.  It was a huge show, of course, and a GREAT last show to play before another 2 months of dedicated songwriting… but we only have so much time to ride this high, and then it’s back to work.  We’re going to get back to writing, back to practice, back to working on our live show.  We have music videos in the works, and will hopefully be booking some studio time soon to work on our next EP.  This may have been Molehill’s best show YET, but there’s no way in hell it’s going to be our best show EVER.  We’re going to come back stronger, better, louder, shinier, balder, and handsomer than ever before!

So I’m going to end by saying thank you all so much for the support.  Anyone reading this, anyone who’s ever listened to our music or come out to a show, and especially the people who keep coming back to shows over and over again – everything we have achieved so far has been all because of you.  We couldn’t do any of this without your support!  We are truly blessed to have so many wonderful fans and friends.  You are all amazing, and we love you!

And we’ll see you at the next big show – because I’m a live performance adrenaline junkie, and I need my fix!!