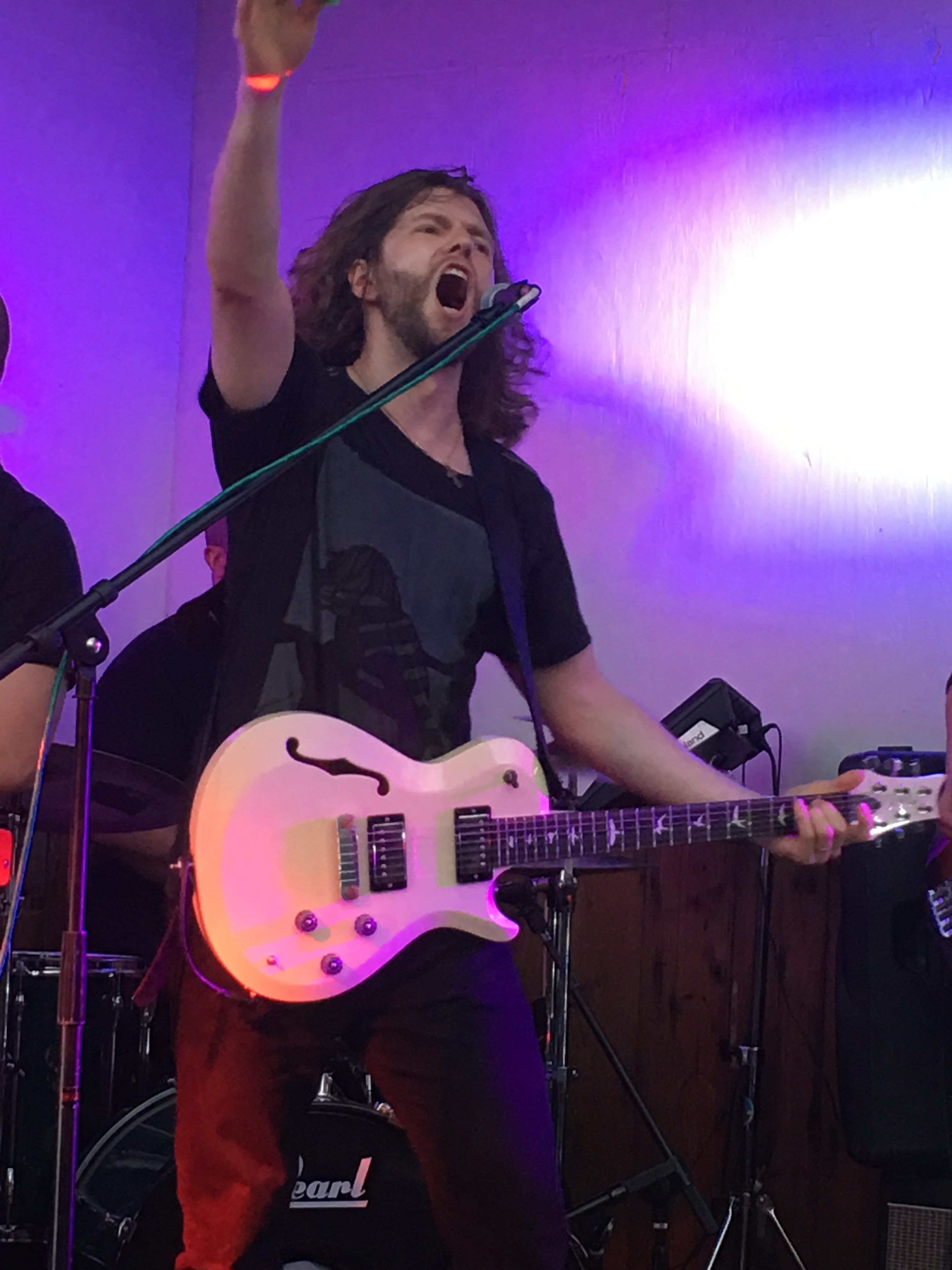 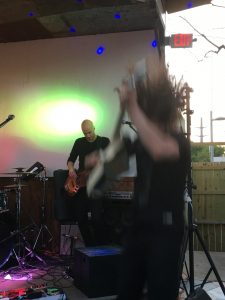 Ahhhh SXSW, always sure to be a crazy and exhausting trip.  This was our 3rd year headed down to Austin, TX for this nutty festival in March, and I like to think we’re getting better at it every time! 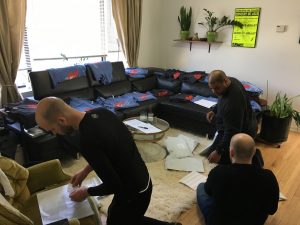 This year has been a busy one so far.  We’ve been working hard releasing new music and videos and merch.  We’re in the middle of a pre-sale for our new EP “Hearts on Fire”, and we just barely got the new tshirts printed in time to hustle and ship them out at the last minute before leaving.

We left Chicago on Monday afternoon and arrived in Austin late Tuesday night.  Upon arriving, we went straight to the closest Mexican restaurant we could find.  We probably said the words “taco” and “margarita” about 10x apiece during the drive, so you better believe we each got the biggest shaker full of margaritas that they would sell us!

On to Wednesday.  We played 2 shows that day, 3pm at Dirty Dog Bar in downtown Austin, and 7pm at Tiniest Bar in Texas. 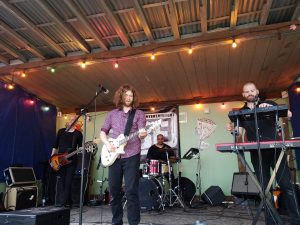 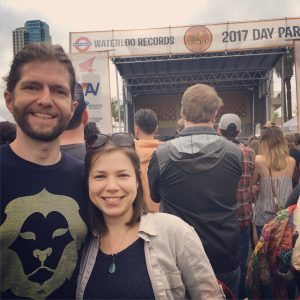 Lisa flew in on Wednesday, and since Thursday was a day off for Molehill, she and I got to explore a bit and check out some cool shows.  We saw Minus the Bear play a free show at Noon on a great stage in the parking lot of Waterloo Records.  It was a great show!  We also had a good time looking at records afterwards. 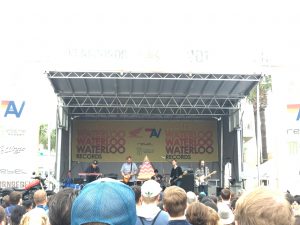 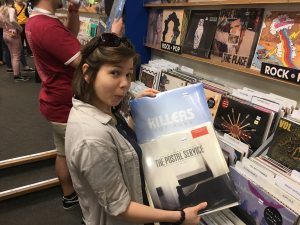 After the Noon show I got a text that our old buddies The Dig were playing on the roof of Whole Foods.  Another great free show, and it was just 1 block away from us! 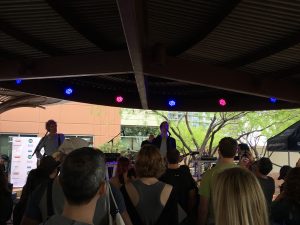 Trevor had been planning on going to see the sunset at the Oasis on Thursday for a while, so we all went with him.  It was maybe not my favorite establishment, but the view was definitely beautiful.  I imagine this would be a great place to stop after cruising around the lake in a boat all day. 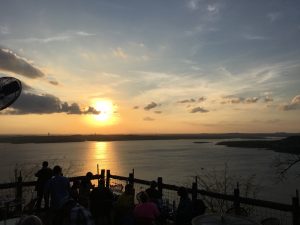 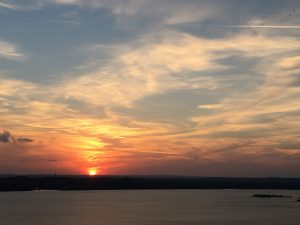 Friday started out like many other days that week – with breakfast tacos. Mmmmm…. 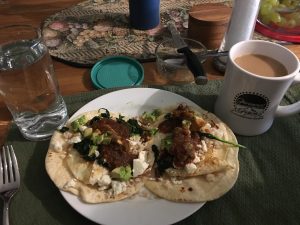 We had only one show on Friday – 7pm at Unbarlievable on Rainey St. – a little tucked-away area sort of nestled between 6th street, the highway, and the river.  We got there extremely early because we were very worried about how bad parking might be and how hard it would be to load our gear in.

The venue, like many venues on Rainey St., is a house that has been converted to a bar/music venue.  From the outside it just looks like a little blue house.  and then inside it’s been completely gutted, with a big bar in the middle and another one by the stage in the back yard.  The “grass” was all actually astroturf.  It was a very unique SXSW experience for us. 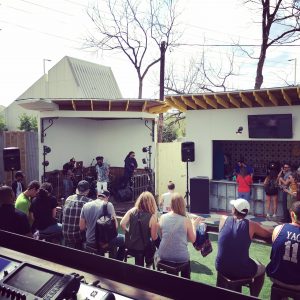 We ran into Ms. P before the show- she told us to swing by after and she’d hook us up with some free chicken.  We did, and it was amazing. 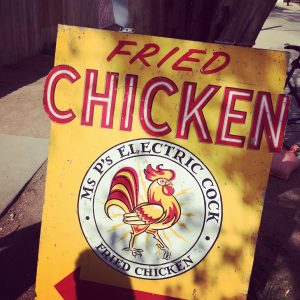 Turns out loading in wasn’t bad at all!  At venues on 6th street, we have to carry our gear minimum 2 blocks for any show, and usually end up parking about 6 blocks away.  On Rainey St., they let us pull right up in the alley behind the venue and load in!  And then Greg and I found a sweet parking spot right by the river about 2 blocks away.  Not too shabby! 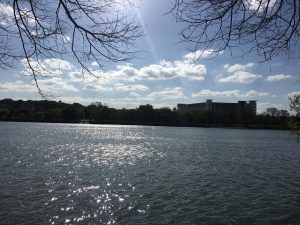 I took this panorama on my iPhone while we were walking along the river.  Not sure how the quality is gonna translate to this blog, but hey let’s give it a shot and find out! 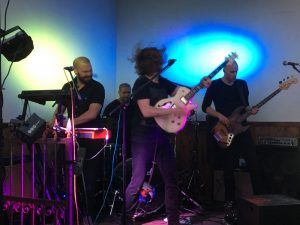 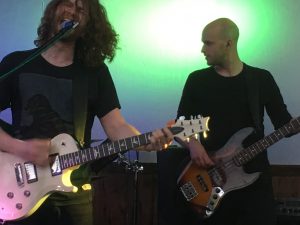 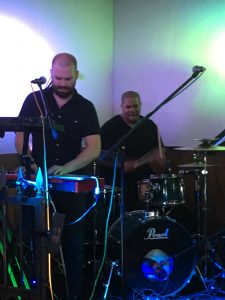 The show at Unbarlievable on Rainey St. was great!  A full hour before we even started, the venue was at capacity.  There was a big line out the door and they were doing one-in/one-out.   Good start to a show!  Most people there were wearing green (since it was St. Patty’s Day), so I tried to drop little bits of St. Patrick-related trivia between songs.  Such as – St. Patrick was captured by Irish pirates at age 16 and forced into slavery.  Who knew??

So yeah, played our show, had a good time, then Trevor and Devin took the van and left since they both had early flights in the morning.  Greg and I were driving the van back the next day, so we decided to hit the town.  First top – Ms. P’s for that sweet fried chicken!

Next stop – the Chuggin’ Monkey for The Noise FM‘s show! 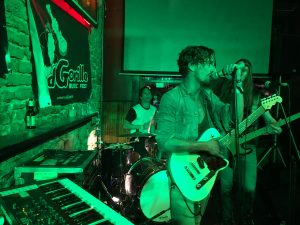 After that, exhaustion from all the walking and carrying gear from the last few days started to set in, so we headed to Minibar just down the street to sit on the couches for a minute and chill.  We noticed the large-format Jenga game they had there, and before long we had a pretty intense match going. 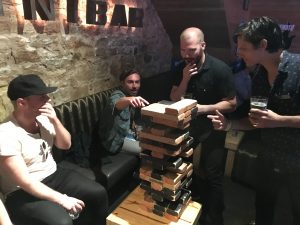 My team was victorious, although Alex from the Noise FM caught a video clip of GVZ making the game-losing move, and it looked very much like some girl came up behind Greg and pushed him in the back, after which he immediately knocked the tower over.  Let’s just say Greg wasn’t completely aware of his surroundings at that time, so couldn’t say whether or not he had been pushed… the evidence was pretty strong though.

After Minibar, Greg (master of Yelp) found our next destination – a 24-hour IHOP!  We had to wait about 40 minutes to get a table because the place was a shitshow, but it was well worth it.  I had the most delicious smoked sausage breakfast platter with a side of pancakes.  Greg ordered the cheeseburger omelette.  I’m a bit disappointed in myself that I didn’t get a picture of it, but it was about as large and unhealthy-looking as you would imagine.  It was pretty hilarious.

We took a cab back to the apartment we were renting and got to bed around 4am.  About 30 minutes before Trevor and Devin were getting up to leave for their early flights.  Greg and I got about 5 hours of sleep and then got up and slowwwwly got ourselves together and into the van for the long drive home.  Bonus from not drinking much alcohol and drinking water and eating pancakes instead – neither of us were hungover!  In fact, other than feeling SO tired, we were physically in good shape!  It was a far cry from SXSW 2016 when Greg somehow got mono on Thursday and I dropped him off directly at the hospital when we arrived in Chicago.

Our friend Noah told us to stop at Buc-ee’s on our way out of Texas.  It was a pretty crazy place.  Just a MASSIVE convenience store/gas station/truck stop type place.  They had all kinds of food and supplies and clothing.  Also this sweet statue in front: 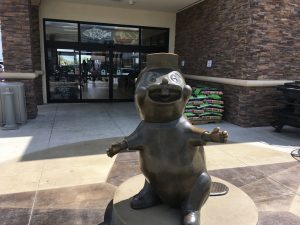 Not sure how well I captured it on camera, but there were more gas pumps at this place than I’d ever seen in my life… 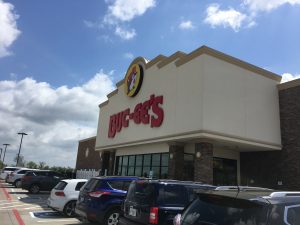 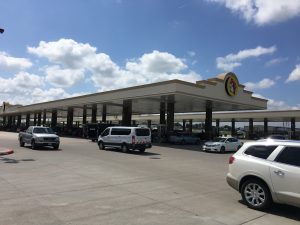 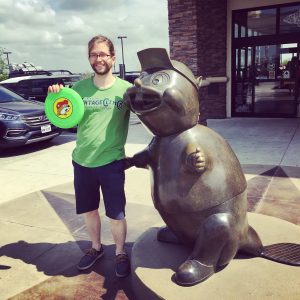 I tried to get a picture with my arm around the Buc-ee statue in front (holding my sweet new Buc-ee’s frisbee), but instead of looking like I have my arm around him, it looks pretty clearly like he’s (she’s?) grabbing my ass.  Hey I’m fine with that, I was in a pretty good mood!

Greg and I made horrendous time Saturday, mostly because I was constantly drinking water and needed a bathroom break every 60-90 minutes.  We did eventually get to our stop in Missouri without any major issues. 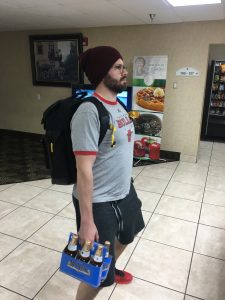 Here’s Greg in the lobby while we were checking in.  He says he was doing some stretches, but I think he was going a little loopy from sleep deprivation

We had HBO in our hotel room, Mad Max was on.  I seriously considered watching all 2 hours of it but decided to go to sleep about halfway through.  I needed to catch up after all.

And then, around 7pm on Sunday night, we completed our 1,100 mile drive and arrived at sweet home Chicago!  It’s so cool to see all the great skylines as you pass city after city driving through the country, but it’s an extra special feeling when you finally see that great Chicago skyline greeting you in the distance.  We were both exhausted, but we had made it home safely, and the trip was finally over. 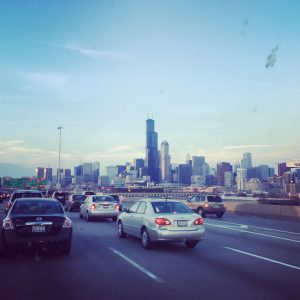 And there you have it, another SXSW in the books!  We have a couple days to catch up on sleep but need to start preparing right away for all the other shows we have coming up from the Chicago suburbs to Toronto.  Not to mention continuing with the “Hearts on Fire” presale, printing CDs, writing thank-you letters to all of our fans who contributed to the presale… the list goes on and on!  So, on that note, I think I should get back to work!

Thank you all for your continued support!  From the venues that keep bringing us back to the fans who keep attending shows – your support means the world to us, and we will keep working hard to write the best music and play the best shows for you that we possibly can!