After a nice a break from touring over the Winter (minus a few shows in February) it was great to be back on the road to play in a few town we have never been to before.
Iowa, this is all. 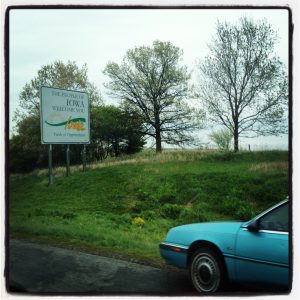 After a solid 8 and 1/2 hours in the Silver Bullet from Chicago we had a nice welcoming to Kansas City by entering a club that neither smelled like cleaning agents or what the aforementioned cleaning agents might have missed—this is almost always a good sign.  Seriously, CZAR Bar, solid work.  To make matters even better the pork tacos were delectable.

KC bands Apples for Archers and Think Like Computers put on some stellar shows.  This was one of the best vibes in a room that there has been in recent memory.  Supportive and enthusiastic folks in KC.  Thank you. 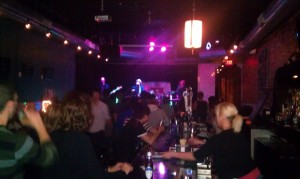 We made some great connections with the guys in Burning Symmetry.  Young band with a great future!  The drunk dude that cornered us and directed us never to give away download cards was a tad annoying and the fire in Greg’s belly grew warm.

After a quick viewing of ‘Fargo’.  Pete’s BBQ dreams came true. BBQ for breakfast.   Sorry no shots from the Peter/Trevor 4am waffle house run.  It wasn’t pretty. 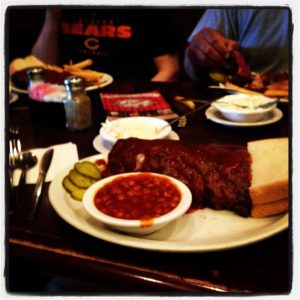 Tornado watch on the drive there kept things interesting.  I do think I was the only one remotely worried about this.  Too many viewings of Twister.

For everything that kicked ass in KC there was something to even that out in Omaha.  Because of the Tornado watch there was not too much activity going on.  I guess even the natives were scared.  The local news did make it seem like the world could end that night.

Nevertheless, we met some cool bands at the venue, rocked it, and all went our own ways.  Greg drove Devin back to the hotel, I checked out some music and Peter corralled our executive producer of ‘Equinox’ John Rothstein (who flew in from Amsterdam).  John didn’t seem too welcome at the ‘ole Barley Street Tavern for an unfortunate misunderstanding.  We never did work that one out.  While Pete and John were shading around Omaha I made a friend and life long (albeit a shorter one than most) Molehill fan.  Cats in bars = Rock and Roll. 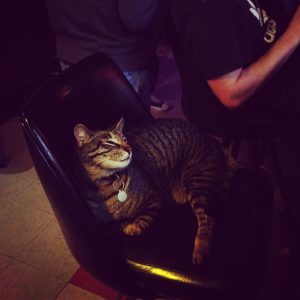 Then the night took a turn.  GVZ got a flat tire on the way back to the club which resulted in an awkward and incredibly non-butch change of the Silver Bullet’s tire and 2am.  I wish I wouldn’t have slept through Driver’s ED.  Peter was supportive and kept making mentions of a victory shot afterwards.  That was not in the cards. 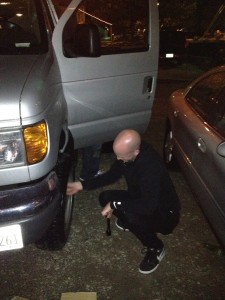 After one unsuccessful attempt at filling up the spare, 3 bad hotel key cards, and one broken lock in the van 3 of us went to sleep peacefully.  I do have audio of the snoring but will save that for a more useful moment.

3 hours of sleep and quick drive back on Sunday and we’re done.  Until next time.