May was a busy, busy month for Molehill. We started out with a great tour that took us from Indianapolis to New York. We were voted into a battle of the bands by YOU our fans and friends and got to perform at CBS Studios Chicago. Not only did we get to play in front of some industry folk and gain some exposure, we also received 5 star treatment from our production team at Tribeca Flashpoint.

We have new videos, merch, banners, and a new iPhone app that will be available in the coming weeks. 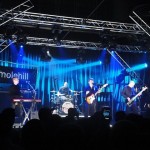 We also solidified all the dates for the recording of our new album with Manny Sanchez at IV Lab in Chicago and should be finished tracking by the end of September.  We are expecting to record a bunch of new material that has not been heard yet and have it ready sometime in the Fall for release.

In the next few weeks we have radio appearances on UIC Radio and Fearless Radio in Chicago and will be performing at the Hard Rock Cafe Chicago on June 9th with The Sweeps at 9pm.  The following evening we will perform at Mickey Finn’s in Libertyville, IL.

Until next time, thank you for all the support and we’ll see you at the next show!

Heat, TJ, The Mailman and Devin