December 20, 2011 by molehill in Uncategorized

The short tour Molehill completed this past December reminded us no matter how many times you have organized a tour you never run out of surprises! 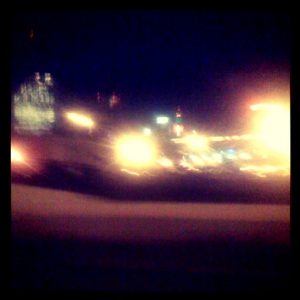 We started the tour off with a bang by leaving more than an hour late due to my inability to have my toiletry bag packed with the rest of my gear.  After a quick 6 hour drive to Columbus and we rocked  a set at Rumba Cafe….we saw some old friends and met some new ones and had a fan come up to Pete after the show and say “get your new music out soon!” and promptly walked out of the club.  Rock?

I had the great idea of making it a few hours closer to NYC so our drive wasn’t so long the next day.  What I failed to realize is that there was lake effect snow near our hotel in Akron, Ohio.  We also learned that it is more helpful to use the Priceline App to book a hotel the day before and NOT at 2am for a 4am check-in.  Nevertheless Pete bartered away and got us a great rate….what a resourceful guy.

Pennsylvania is a beautiful state.  It is also 283 miles wide.  After a dinner at Panera in NJ (we’re working on a sponsor)….we followed Greg’s Android through a unique path to the Lower East Side of Manhattan.  I know we were in trouble when, after having more trips to NYC than I can count I didn’t recognize anything on the Android’s suggested route.

We finally hit an intersection that was in the process of being expertly torn up by some large machine. 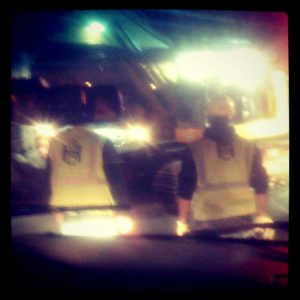 This dude had so much skill in negotiating this giant machine through traffic, under a bridge and almost slamming it down on the Silver Bullet that we starting cheering once we were finally able to move through the intersection.  Seriously, this dude was an artist with this thing!

For the rest of the drive to the club Pete was stressed out about some clicking sound the Silver Bullet was making since Pete drove over a pothole at the construction site.  Don’t worry, The Silver Bullet is fine.  I’m not sure I can say the same about Pete’s worry-free attitude. 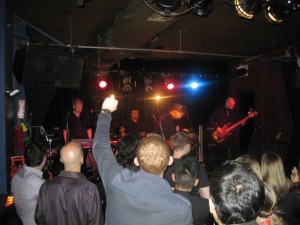 When we got to the venue we were surprised by our good friend (and co-Executive Producer of the new album) John Rothstein.  He flew the whole way in from Amsterdam!  The show in New York was great….tons of energy and a great audience.  I think we’ve played 5 shows in New York now and each one is always a highlight of the tour!

After-parties in NYC are also the best and this time around was no exception.  Great times and a bottle of Champagne to top off a great night!  Devin remained cool, calm, and collected in the middle of it all….. 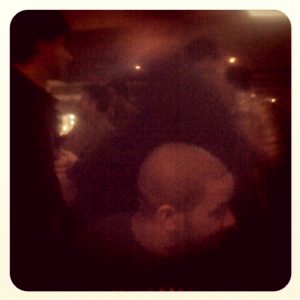 The morning after greeted us with a terrible site:
Fortunately the NYPD failed to mention that they towed the van one block away.  Don’t worry, Pete didn’t spend a stressful hour trying to track down the van before a city worker said, “Oh the Silver Van, yeah, that’s one block away from your location.” 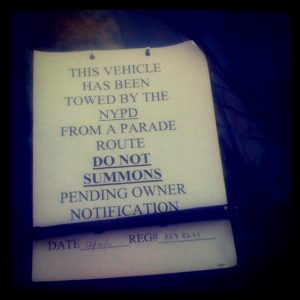 The morning after for Devin was especially good because he ran into one of the great jazz drummers of his generation, Brian Blade!  Brian Blade was an incredibly nice and genuine guy….always good to see from legendary musicians! 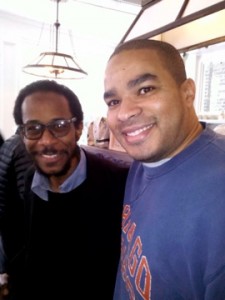 What can we say about Shippensburg?  The owner of The Thought Lot, Tony Diehl has turned a 10,000 square foot space into an art and music venue.  Shippensburg is a pocket of the country that we wish we could find everywhere, where people come to listen to music and be part of the experience of a live performance and support musicians and art.  What a great place!  This is was our second show in Ship and I’m pretty sure we saw almost every single person who was at the first show in October….ROCK!

That’s it for live shows in 2011….we have plans to tour more than ever in 2012 to support the new recordings.  We truly appreciate every person that has seen a Molehill show in 2011.  See you at the next show!