September 13, 2011 by molehill in Uncategorized 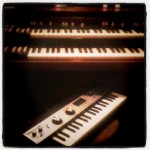 Hi all, things are incredibly busy in the world of Molehill right now.  A few weeks ago there was a great turn out to the Molehill show at the Beat Kitchen.  Thank you!

We are deep into recording the new album and it has been going really well.  On Sunday we laid down some gang vocals with everyone in the band…this was a hell of a time……  Videos to come later!

So far the recording process has helped everyone in the group more intimately understand what each one of us brings to Molehill.  More importantly what has been great is putting all those parts together and seeing what the resulting sounds are.  This album will have horns, strings, synths, guitars, gang vocals, and probably a lot more by the time we’re through!  It is unbelievably fun experimenting with new and vintage gear in the studio and adding it to existing songs.

Devin came in and played his ass off (as always) and put down 15 crushing drum tracks in 3 afternoon sessions.  Right now we’re in the middle of building on that foundation .  Once we have all of this down the album will be mixed by one of the best mixing engineers out there, Manny Sanchez.  Manny produced and mixed the upcoming album from Patrick Stump and he has a steady stream of recordings that sound incredible.  Needless to say, we are incredibly excited to be in the middle of this process and can’t wait to hear the final product.  We’re working on the CD Release show right now and we should be announcing it soon along with a lot of tour dates.  Keep an eye out for some footage from these sessions……..

Keep up with us on Twitter for some commentary and ridiculousness that can only come out from spending an inordinate amount of time together in small rooms.