October 12, 2011 by molehill in Uncategorized 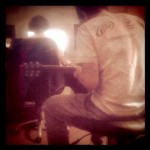 From the files of Pete the Heat

Where do I begin?  In my life so far, I have recorded a total of 3 full length albums with my various bands and solo projects.  The album we are currently recording will be my 4th, and by far the best album I have been a part of.

It’s been a hell of a ride.  Looking back over the past month, I think we’ve all learned a lot about the recording process and ourselves as musicians.  Leading up to our studio time, I was stressed.  I was putting a lot of pressure on myself to make sure I was eating and drinking the right things to help my voice, I was going over all my lyrics, fixing things up here and there, sometimes re-writing entire songs.  I didn’t know what to expect from the guys at I.V. Lab, but I knew one thing – I wanted this album to be great, and I wanted to give every bit of energy and focus I had to make sure this was the best album we could possibly make.  I want the music I make to be something I can be proud of later in life.  Whether or not this album brings us any success as a band, I just wanted to know I gave 100% and did the best I could do.

Fast forward to last night, finishing up my lead vocals for the last 2 songs we had left, and finishing up guitars for good.  I was feeling loose, and I was in a great mood.  All of our songs are sounding better than they ever have.  It’s crazy to think that we’re actually almost finished with this thing.  There have been some frustrating moments over the last few weeks for sure, but in the end I DO feel like I’ve given it my all, and I DO think this is something I will be proud of for the rest of my life.

In the first few days of tracking, we laid down all the bass and drums, and Trevor and Devin, as usual, killed it.  After that, we did a week straight of rhythm guitar tracks.  Heading into that, I’ll admit, I was cocky.  In the past, I’ve always knocked out rhythm guitar tracks in one or two takes.  Then again, in the past I’ve never been recorded by Chris Harden of I.V. Lab.  Chris has one of the best ears for rhythm, and he was the toughest critic I’ve probably ever had on my rhythm playing.  It turns out that I was almost ALWAYS rushing.  There were some days that I would just leave the studio fuming, but it was all for the best, because now I feel like I have learned something about my playing which will certainly make me better.

Speaking of things I used to do in one take – the next week was lead vocals.  Or, it was SUPPOSED to be finished in a week.  Chris pushed me harder than I’ve ever been pushed though.  Even when I thought I was nailing songs on 2 or 3 takes, Chris would make me do about 10 takes (greedy bastard) just looking for that “perfect performance”.  Well, it worked, and the songs are really slamming.  The only downside is that I’m not used to pushing my voice like that!  10 takes of one song is basically a full concert’s-worth of singing!  So I came in thinking I could do 4 songs per day, it ended up being only TWO songs per day.  As a result, we had to stretch out our recording time a bit more, but it’s all worth it in the end.

Now it’s so rewarding to listen back to all these tunes, knowing all the hard work that went into each and every one.  From playing rhythm guitar tracks over and over again while Chris says “rushed a little bit on that one”, to singing my 10th take of a huge chorus trying not to blow out my voice, to Greg playing a sweet iPad solo while Trevor and I jealously stand over him and watch.  We even found some time to relax and enjoy ourselves – making beer runs at the end of a long Friday session and knocking a few back with Chris and Manny.

And really, if I came to any sort of deep realization during this whole process, it’s that I need to find that time to relax and enjoy myself.  Music has been my passion and my dream for most of my life.   But I can’t worry about whether or not my band is successful or who does or doesn’t like us.  What’s important is that I don’t take experiences like this for granted.  Spending a month in a recording studio is something a lot of people never get to do.  As much as I try to treat this band like my job and push myself to give it my all, it’s important to take a minute to try to enjoy myself as well.  Of course, that can be hard sometimes when you’re on your 10th vocal take of your favorite song and it just doesn’t sound right…

That must be why God created beer.