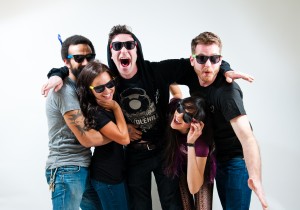 Well, that was fun.

After taking 2 months off to hibernate, write new songs, and have a crazy drunken Molehill merchandise photo shoot, we got back to playing shows. 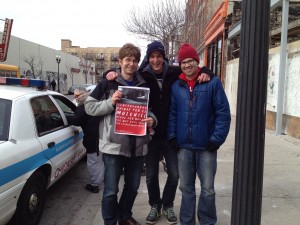 First, we played Subterranean in Chicago on Friday, February 22nd.  This was a great show, though we got in a bit of trouble with Officer Corchoran for putting up posters on abandoned store windows.  After a brief, intense interrogation period, and after we took the offending posters down, he was nice enough to give us back our IDs.  No messing around on Corchoran’s beat!

Lisa told me earlier this week that Mercury was in retrograde.  Apparently, this means that everything’s about to go wrong.  Thanks Mercury…dick.

Now, let me start this by saying that I love Milwaukee, probably more than most people.  Milwaukee stands for 3 things that I love in this world – cheese, sausage, and beer.  In fact, other than the Green Pay Packers, I think I love everything about the state of Wisconsin.  Especially cheese curds.

BUT playing in Milwaukee has been difficult for us, not sure why.  I don’t know what it is, but it’s just been tough to build up a following.  This particular Friday, we were playing with two other very cool bands, but the crowd in the bar wasn’t really paying attention to either of them.  Devin told me before our set that he wasn’t feeling the crowd… yeah I’m not surprised, that first band kicked ass and they got the quiet golf clap after every song.  By the time we played, there were about 12 people in the bar – 4 of them were our friends, the other 8 were the members of the other 2 bands.  We still gave those 12 people the best show we possibly could, but it wasn’t the most fun drive back home that night.  These, friends, are the lows.  Better than one of the other Milwaukee shows we had, where at one point the only 2 people in the crowd were my sister in law and the sound guy…. I guess. 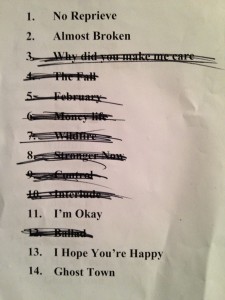 The next night, we returned to my hometown of Libertyville, Illinois.  Libertyville’s always been good to us, but Mercury had to come F this one up as well.  We played with 2 other great bands, but there was a huge miscommunication amongst the bands, and we didn’t end up starting our set until TEN MINUTES BEFORE THE BAR CLOSED!!!  You’ve gotta be kidding me.  I was sitting backstage the whole time, getting progressively more and more amped up.  “Okay, we WERE supposed to play for 1 hour, but it looks like we have to cut 2 songs <scratch, scratch>… shit, looks like we’ll only have 40 minutes, couple more songs <scratch, scatch> WTF SOUND GUY TELL THESE GUYS TO STOP PLAYING, ONLY 20 MINUTES!!!  <scratch, scratch, scratch>. ”

The band before us was very apologetic.  They had been told they could play for 1 hour, 15 minutes.  If you add up the times every band was told to play, plus changeover time, that would add up to a nice 3 hours and 40 minutes.  Funny, there were only 3 hours of open bar time available for the bands to be playing. Thankfully, the bar let us play past closing time, so we got a nice 23 minute set, and dammit if that wasn’t the best (and only) 23 minute set we’ve ever played!! 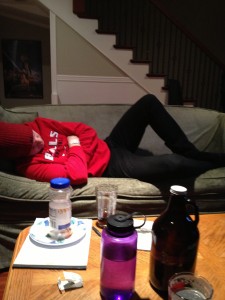 Afterwards, we came home, and I attempted to keep Greg awake with beer from Mickey Finn’s and the movie Scott Pilgrim Vs. The World.  He did an admirable job staying up.  But I had some serious adrenaline keeping me awake that night, so that made me the guy taking the picture… 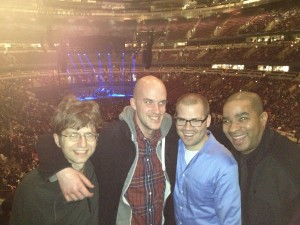 The following Monday, the 4 of us went and saw Muse at the United Center.  I took a cab from work to the bar where we met up, and I told my cab driver that just about everything had been going wrong for me lately.  He said “you’ve got to just keep on going.  Every minute, you can make things better, that’s what life is.  The only people who can’t say that are the ones who won’t live past this minute”.  I said, you know what man, I think I’m gonna turn things around right now.  Things have been off lately, but I think I’ve taken my hits, and now it’s time to bounce back!

Needless to say, Muse was incredible.

We played a live set on undergroundcolumbus.com in the afternoon.  Very cool.  People from other offices at the Ohio Center for Broadcasting complained that we were too loud, so we had to cut our set short – rock and roll!

Then, that night, we played Mansfield, OH, at Planet Rock. 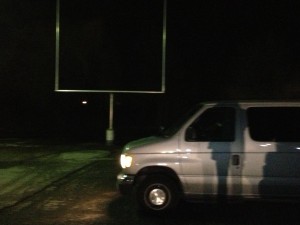 We had never played Mansfield before.  First thing I noticed – the venue had a huge goalpost at the end of the parking lot.  Somehow, I think that’s a good omen.

The show was great.  The sound was great.  I won’t lie and say there were a lot of people there, but the people who WERE there were awesome.  We got a fantastic response.  We’ve played shows at crowded bars in front of 300 people before where nobody gives even the tiniest shit about the band that’s making them have to yell to be heard by their drunk friends.  If I had a choice, I’d play in front of 20 people who are really into the music rather than 300 people who don’t care every single time.  It makes a world of difference.  Mansfield, while maybe not so high on quantity of people, was definitely high on quality of people, and that’s what’s important.  We can’t wait to go back!

We drove back to C 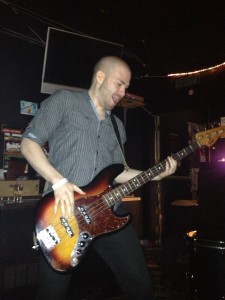 olumbus on Friday after the Mansfield show.  First time we’ve ever stayed at the same hotel for 2 nights – pretty sweet!  The next day was super relaxing – as opposed to Friday, where we loaded and unloaded the van 3 separate times in the same day.  Saturday, we got to have a relaxing breakfast, and we even had time to go see Zero Dark Thirty for $1.75 at a second-run theater in C-bus.  That night, we had a fantastic show at the Scarlet and Grey Cafe in Columbus.  Great turnout, all the bands kicked ass, great night overall.  A couple people we met in Mansfield the night before even drove out to see us again in Columbus.  Awesome.  This was possibly the best show we’d ever played in Columbus.  We got a great response from the crowd, and had a great time.  We all had a good feeling about this night from the onset, hence Greg’s sweet bass warmup in the green room before showtime…

The Silver Bullet’s check engine light had been going on and off all weekend, and the van started making a pretty disturbing thumping noise on the drive back to our hotel… No bueno.  Thankfully, the noise eventually stopped.  This was the one unhappy moment of my day, really.

After 4 hours of sleep, we hopped in the van and drove to the Waffle House, then back to Chicago. 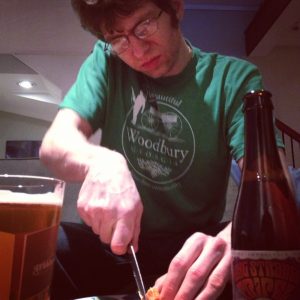 After 6 hours, a time-zone change, and daylight savings time (bastards), we finally arrived back at our place in Chicago.  I was incredibly relieved that the Silver Bullet made it the whole way without dying, and I decided to celebrate with some delicious beer and 5-year aged gouda.  Note the determined look on my face while I try to slice up that cheese.

It feels great to be back, and it feels even better to be back after a successful tour!  We were feeling great after the Subterranean show, then pretty low after Milwaukee/Libertyville, and then feeling great again after Ohio.  Trevor said on the drive back that he’s glad this band is made up of people with positive attitudes.  I don’t think it would be possible to keep going if we had anything else.  I said to somebody over the weekend that I think the people who are successful in music are the ones who can keep getting back up after being shot down.  It’s about repeatedly banging your head against a brick wall until you finally get through.  Well, this is certainly a band that can keep doing that!  I must say, though, it’s a lot easier to handle when you end on a good note!